Controversy is beginning to brew in Malibu over the potential removal of the Rindge Dam in Malibu Creek State Park. Back in 2013 the Army Corps of Engineers along with California State officials presented an initial 100 million dollar plan to remove the dam which essentially has been tabled. Fast forward nearly four years later and talks about the dam removal have started up again.

Rindge Dam. Controversy is brewing over it's potential removal. There is a hearing tonight form 6-8 at the Las Virgenes water district offices in Calabasas concerning this matter. More information to come soon on allthingsmalibu.com.

The Army and State recently released a 600 page document called the Draft Integrated Feasibility Report which outlines plans for the removal of the Dam along with the built up sediment that has accumulated around it for 50+ years. The DIFR also outlines many impacts of the removal pertaining to the environment, traffic, aesthetics and more. The new preferred plans outlined by the State and Army are estimated to cost upwards of 160 million dollars.

The Dam was built in 1926 for the purpose of providing water to the Rindge family ranch and the growing Malibu community. The facility was officially no longer functional by 1966. In the time between its completion and shut down in 66’, records show that it never really was fully functional and that it was collecting sediment from almost the time it was built. Public access to the dam was closed in 2014 due to young adults and children hiking down to jump off of the dam into the water. 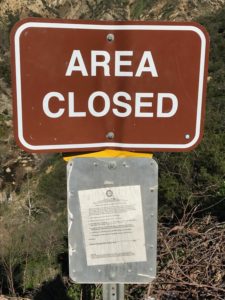 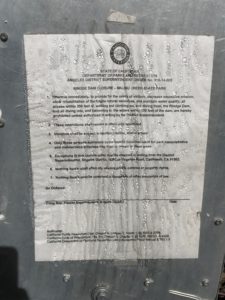 From what we can gather there are two major issues to understand about the removal of the Dam; (1) the primary reason to remove it and (2) the main challenges that come with actually removing it.

The major reason for removal of the dam seems to be that it acts as a barrier for the endangered California Steelhead Trout to swim upstream to reach the Malibu Creek Watershed. The watershed is where the trout go to spawn and the argument is the man-made barrier restricts their natural reproduction which limits population growth.

The major obstacle in the dam removal process seems to be removing 50 to 60 years of accumulated sand and rock that has built up behind the dam. The sand and rocks must be carried out in truck loads and it is estimated that it would take about 8 years with 3,000 to 11,000 truckloads per year.

There are two different proposed plans for the removal of the dam, one from the Army and one from the State, however the two plans are fairly similar.

The proposed plan by the State calls for the removal of the dam arch and also the spillway. This plan intends to send the sand by trucks directly to the beaches of Malibu during non peak beach season, after Labor Day and before Memorial Day. This plan is estimated to cost around 166.5 million dollars.

Funds have yet to be officially allocated.

A 50 year plan to have the sediment erode naturally has been proposed as an alternative.

There seems to be a lot of local opposition to the plan. One major argument against the removal is obviously the incredibly high price tag. 160+ million dollars is a lot of money and many feel this amount of money could be used elsewhere.

Another major opposition to the plan is that some doubt the trout were ever even in the upper watershed. If this is the case, the plan to save the trout could all be for nothing. Some argue that even if they are there, is it worth the $160 million?

Furthermore, people expect that this plan may do more harm than good to the environment. Some feel that all this construction will destroy the natural habitat that exists there already.

Just like almost every local political issue in Malibu, there is going to be a lot of passion on both sides of the argument.

A comment period for the DIFR is now open until the 27th of March. Wherever you stand on the issue, you can voice your concerns. You can send in your written comments to: