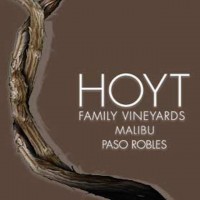 Click to enlarge image.
Contact Information
Contact Hoyt Family Vineyards
: (310) 457-3832
Visit Website
More Information
When Carol and Stephen first decided to leave Hollywood and move to Malibu they either wanted a home where they could walk to the Beach or Grow Grapes. They happened upon a property that could do both. In 2001 they planted their first vineyard. The properties proximity to the ocean offers the perfect environment for growing their award winning Chardonnay. Realizing soon they would have lot’s of fruit, Carol bought a 100lbs of Cabernet and made her first wine, with her then 2 1/2 year old daughter in tow, in the kitchen of their house. In 2004, after their first harvest, they moved their winemaking to a custom crush Facility and made their first Chardonnay. Since then, they have grown and have been sourcing fruit from Santa Inez, Malibu and Paso Robles. Their desire is to keep all of their wines from the southern and central coast of California. So much so, that they have now purchased an 86 acre ranch up in Paso Robles on the most desired west side. They are very excited to add Tempranillo, Cabernet, Viogner, Grenache and Petit Verdot to their crops.
AdSense code
Tweet This
Flag Ad